Please use your credentials to login.
You can't see the captcha?
Please click here to reload the captcha control.
LOGIN Click here to create account
This site stores cookies on your device. These cookies are used to enhance your browsing experience and provide you with more personalized services. If you want to use the sites without cookies or would like to know more, you can do that here

Exchange Rate Monitor - How currency exchange fluctuations can affect the cost of your trip and a clever tool to check how your cash is affected.

One factor often overlooked by travellers is the gains and losses which occur in currency transactions.

By keeping a close eye on currency fluctuations and being prepared to make travel decisions based on this information you can make a big difference to the cost of your trip. 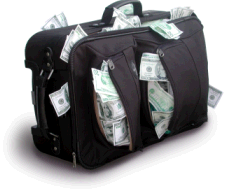 Here we take an in depth look at this phenomenon and the new tool available on the Red Planet Travel website which can help you seek out a potential bargain.

TL/DR - How do I get to spend less?  Scroll to bottom to see the chart.

For those that are interested in the mechanics of this read on.

What are currency exchange fluctuations?

We know that the value of different currencies can change against each other over time.

This is due to the fluid nature of money, and the market that allows people to buy and sell currency freely.

A country’s currency might increase in value as their government creates an environment where there is inward investment, for example, by lowering corporation taxes.  Or a country might possess natural resources such as timber or coal.    In both these cases the currency of that country will be required by companies who which to invest or purchase the raw materials.

So the company will have to enter the markets and buy the currency of the country where they wish to make the purchase.  Large purchases like this e.g. for land for a factory or plant will drive up the value of a currency as it becomes scarce in the markets.

If you are lucky to live in a country like this, you may find your currency increasing in value – that is you can buy more of another country’s currency for the same amount of yours.  The downside is people trying to sell things from your country have to ask their customers to buy their more expensive money to do it!  This applies to the tourist industry:  It is an “export” product in that it brings in foreign currency but it is “performed”, i.e. carried-out within the borders of the exporting country.

On the opposite end of the spectrum, and where it becomes interesting for Red Planetters is where a country finds itself with a devaluing currency in relation to the currency you hold or are paid in. 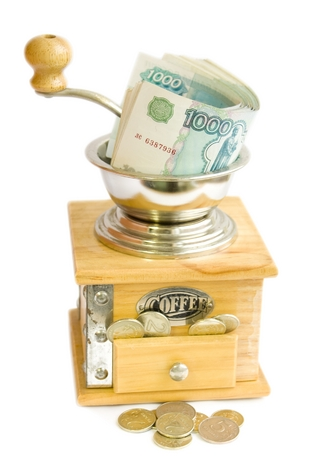 Looking for bargains some travelers can make huge savings by travelling to countries as their currencies come under pressure or are being manipulated for political or economic reasons.

In the recent crisis (2009 onwards) the UK Pound Sterling was considerably devalued against the Euro.  This resulted in many people in the UK enjoying “staycations”, as they did not want to spend so much travelling in Europe, and conversely many European travelers found the UK excellent value and tourism from Europe surged.

There are many variables involved in this and care needs to be taken with the currency data so informed decisions are taken:  Factors other than simply economic might be at work e.g. rioting, or violence can rock exchange rates – possibly a cue not to visit a country even if the prices are rock bottom!

It the time of writing (2015) as an example, Norway – which is renowned for being an expensive destination is undergoing a revaluation of its currency due to the change in the oil price – on which its economy is heavily dependent and influenced.

This provides an opportunity for savvy travelers e.g. holder of USD who can purchase 23% more Norwegian Krone than at the average price over the previous 5 years. This will definitely have an effect: It still might not be possible to have more than 1 beer in an evening.

But that beer won’t be nearly $13, but closer to $10.  If your room cost $130 previously, it might be less than $100 today.  These are savings not be ignored – particularly if your wanderlust means you WILL visit Norway one day – today might be a good day to go.

Where it may not apply

Some resorts and hotels price their rooms in a foreign currency e.g. many places in the Caribbean show prices in USD.  This means they are insulated from currency fluctuations that could adversely affect them, if they sell rooms in advance, and by the time the visitor arrives the currency has collapsed, causing cash flow problems for the establishment.

Pricing in foreign currency is also used to make the prices more understandable to the majority visitor nationality and often the exchange rate given to those paying in the foreign currency can be very poor, and visitors taken advantage of:  Again as an example in the Caribbean islands American visitors can invariably pay in Greenback, but the exchange rate will be rounded in the bar or restaurant’s favour.  If the visitor find this convenient then that is fine, but he might a bit tipsy, lazy or ignorant, or all three.  In any case it is not a situation a Red Planetter would ever find themselves it! 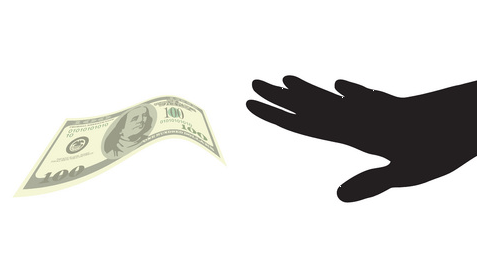 Some countries peg their currencies against others: this means the currency does not “float” against others and its value is not read by monitoring the latest deals in the currency markets, but rather is fixed, exactly or by ratio to another (much more stable) currency such as the US Dollar, the Euro or the Australian Dollar.

If the country you are travelling to has a pegged currency to the currency you use - there won't ever be any change, unless the peg ratio is altered or removed.

By accessing historical rates, and performing some number crunching we have developed a system where we can graphically layout a currency pair’s history and compare it to today.

This gives a meaningful analysis of the situation and allow Red Planet Travel users to investigate more.

The graphs are displayed on every location’s page showing the travelers currency vs the local currency.

Look at this example for Oslo in Norway and the currency graph (Feb 2015). 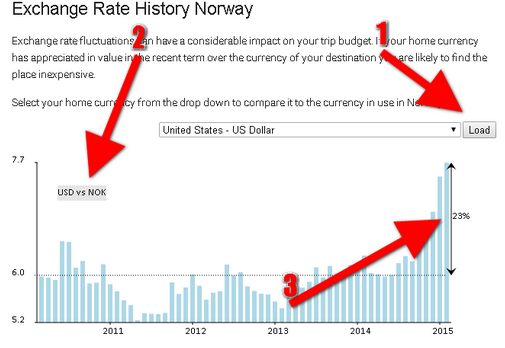 Explanation:  Simply select the currency you hold (1), check the currency pair (2) and look and any movement show with the arrow in (3).

How to keep updated and watch for favourable currency movements?

The Red Planet Travel Exchange Rate Monitor is running on our site and checks currency movement 24hrs a day.

Simply follow us on Twitter or Facebook for general suggestions, or if you have somewhere special in mind sign up for an account and plan a trip. We will then keep an eye on the currency rate of your planned destination, and send you an alert if their currency goes down sizably in comparison to yours.

Keep up to date with the latest developments on Red Planet Travel, get travel tips and money saving ideas. Sign up for an account and you will receive our newsletter. It's "Junk-free" - guaranteed!

Red Planet Travel is made in Andorra